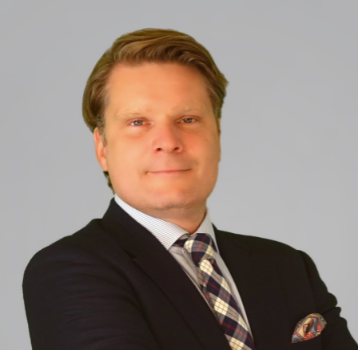 Dr. Maximilian von Wülfing has over 15 years of international leadership experience in the pharmaceutical industry.

He joins Neuraxpharm from Mylan, now Viatris, where he was the General Manager for numerous countries in Europe, his last position being General Manager for Viatris Germany. Previously, he was Head of Global Brand Marketing also at Mylan. He joined in 2015 from Abbott where he had worked as Commercial Director for EMEA West since 2012. Dr. von Wülfing started his career at Altana, being responsible for various positions, also after the company was acquired by Nycomed in 2006. In 2011, Nycomed became part of Takeda Pharmaceuticals, where Dr. von Wülfing held the position of Director Respiratory Franchise for DACH.

He holds a PhD in Veterinary Physiology from the Freie Universität Berlin, Germany as well as various EMBA Certificates from the University of St. Gallen, Switzerland.